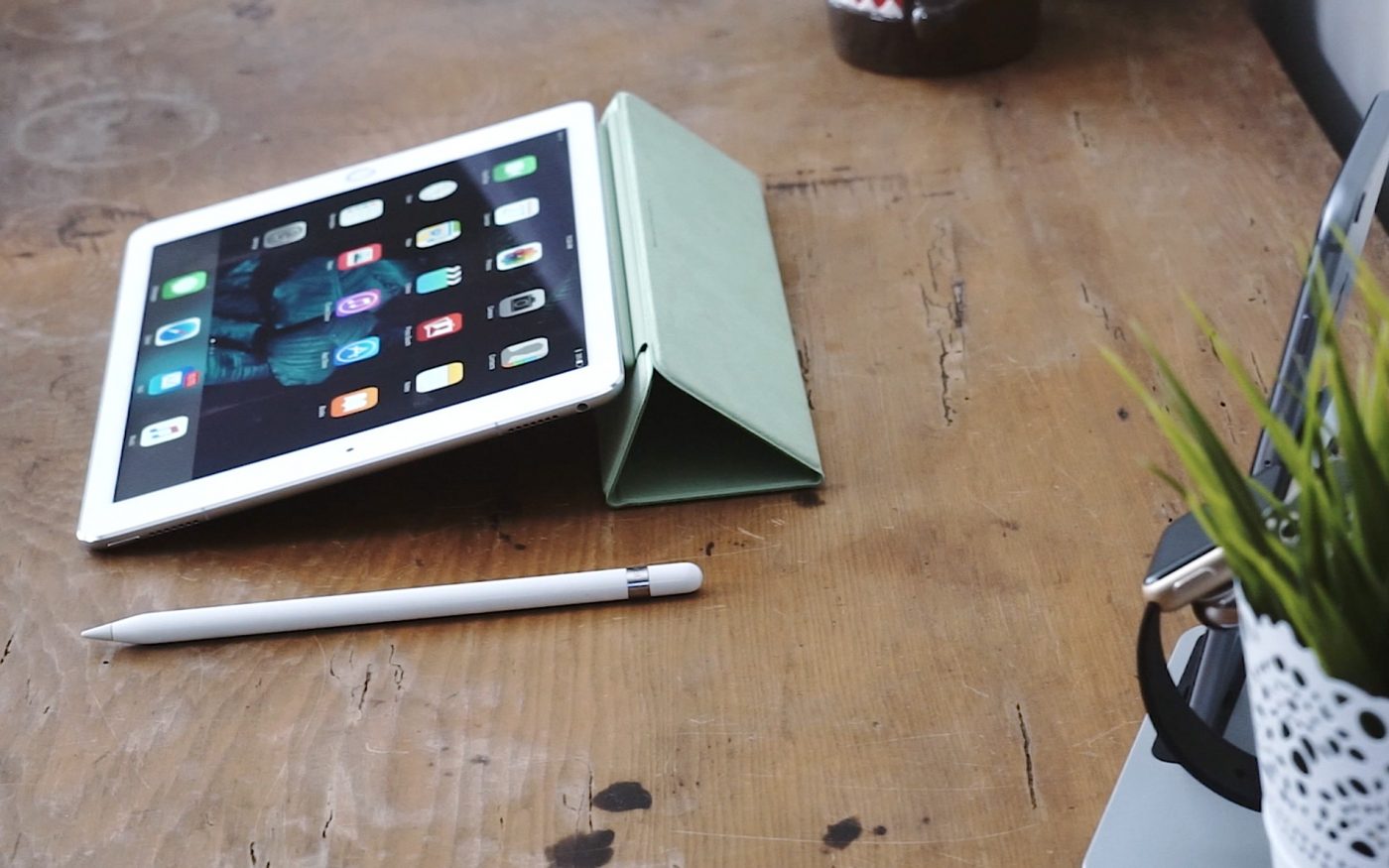 The new 9.7-inch iPad Pro is Apple’s most recent iPad and one which brings all of the features – along with a few more – of the larger iPad Pro in a smaller size. In this review, I’m going to give you a general rundown of the new iPad and give you an idea of what is capable with this iPad Pro. In a lot of ways, the range of iPad Pro models brings us one step closer to being the ideal replacement for many notebooks and PCs.

The iPad Pro’s performance, along with apps, and the Apple Pencil and Smart Keyboard support, certainly makes this a possibility. The iPad Pro is quite different to any other iPad I’ve used in the past and has given me the flexibility to do so much more.

At the end of the day, not a lot has changed physically from the iPad Air 2 – it still has the same build quality Apple is known for. It is only 6.1mm thin and weighs in at 437 grammes. It is made from lightweight aluminium and there is a new Rose Gold finish, bringing the total options to 4.

One noticeable change is the speakers. There are now four of them, two at either end. The four speakers deliver audio output twice of that of the iPad Air 2. There are also some sensors in the iPad which automatically adjust the frequencies of the sound depending on how you are holding the iPad.

You can easily hear the improvement and the headphone jack is still there for those who like to plug in headphones or external speakers.

The camera here has been given a big upgrade with the same iSight camera that is in the new iPhone 6s and SE. This means you can take 12-megapixel photos, 63-megapixel panoramas, and shoot video in 4K, which is 4 times the resolution of an HDTV.

The camera also supports Live Photos, a first for the iPad. This feature brings your photo to life complete with movement and sound when you tap and hold on the photo – the camera automatically captures a few seconds before and after you’ve taken the photo … I think this is one of the best new features of the camera.

I think what is important to note here is the camera on the iPad is different to one you can expect to find in a notebook computer. So with the iPad, you can take photos or record video and with apps do a lot of tasks such as creating a movie or editing the photos you take all from the one device.

To do all these tasks it is important to have a great display. With this iPad, Apple has taken the technology of the display in the larger iPad Pro have used it in this 9.7-inch display, but they have done even more.

This display is 25% brighter, has 25% greater colour saturation is 40% less reflective and has 3.1million pixels.

Unique to this iPad however, is a brand new technology called True Tone. True Tone uses four ambient light sensors which change the way the display looks depending on the lighting in the environment you’re in.

For example, if you’re in a cafe which has dark orange lighting the display will shift to the warmer spectrum, or the cooler side if you’re in a bright environment, in a kitchen or meeting room perhaps. It makes the whole display much more natural and easier to view.

The Apple Pencil and Smart Keyboard, which are Apple-designed accessories, have been created to work with the iPad Pro, enabling a lot more possibilities than previously available. I’ve actually demonstrated them both with the larger iPad Pro in an earlier video which I will link in below.

The Apple Pencil gives you the precision you want in a variety of ways from annotating, drawing, painting, sketching and more. It can also measure the tilt and the force thanks to a number of sensors at the end of the tip.

The Apple Smart Keyboard magnetically attaches to the iPad, folding out giving your iPad a physical keyboard. It’s way easier to type from and is definitely worth considering if you do plan on doing a lot of typing – especially if you are wanting to use the iPad for uni or work.

There are over a million apps available which have been designed for the iPad. Some take that optimisation further and work at their best on the iPad Pro.

Built into the iPad Pro is a new chip Apple have designed called the A9X, which is up to 1.7 times faster than the iPad Air 2 in both speed and graphics. This means graphics for games are much smoother, as are intensive processes such as the rendering of 3D in apps, and editing up to three streams of 4K video in iMovie.

1.7 times faster than the iPad Air 2 in both speed and graphics.

I’ve been playing around with a few apps and find this to certainly be the case, iMovie is one of them – I actually found the iPad Pro to handle the app so well, I wish Apple would add even more professional features to the app.

Another area you see the benefit of all this performance is with the new multitasking features of iOS.

Slide Over allows you to open the second app from the side of the screen without closing the app you’re in. Whereas Split View you can run two apps at the same time which is very helpful if you wish to work on a document in Word while you have Safari open. 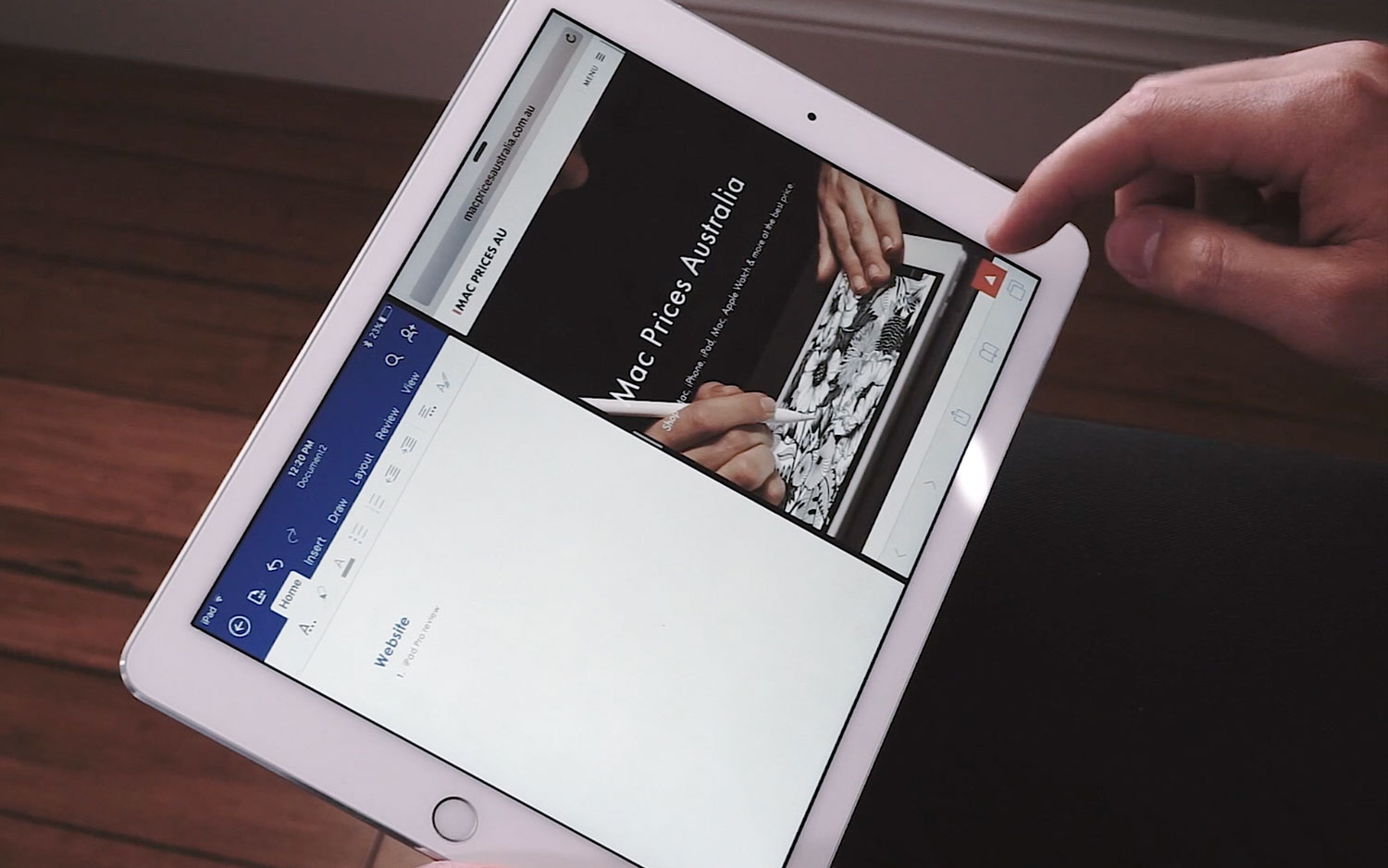 Lastly, there is Picture In Picture, which will scale a video – for example, a movie – to the corner of the display meaning you can use one app while watching the video at the same time.

What can you do?

So what can you do with an iPad Pro?

There are all the typical tasks we all know iPad can do but after using the iPad Pro there are certain tasks I haven’t been able to do from an iPad previously or certainly felt limited in doing so that I can now do, but why is this? For me, the answer to that came down to a combination of things. The iPad Pro itself, iOS with the multi-tasking capabilities, apps and the Apple Pencil and Smart Keyboard.

I do a lot of typing, for example writing news for Mac Prices and doing that kind of task on the Pro with the Smart Keyboard is much easier to do than typing on the display. Then there is ProCreate, an app which has allowed me to draw and paint using the Apple Pencil which was a lot more difficult to do with my finger – that never felt natural to me.

Adobe has also designed a number of helpful apps such as Comp CC for visually mocking up designs and layouts by simply sketching or Photoshop Fix which lets you do a number or tasks simply using touch. Both of these apps feel a lot more fun to use on the iPad Pro compared to the desktop versions.

To some, full versions of Adobe desktop applications might be better for certain tasks, however, the iPad Pro certainly offers the ability to achieve some tasks or planning on the go.

On its own the iPad Pro is a well-made product – its performance is definitely getting to the point now I can stop using my MacBook for many tasks, but I feel for a lot of things I do I need to have the Apple Pencil or Smart Keyboard and those are separate from purchasing.

If you plan on doing only basic things such as emailing or surfing the web and you’re not interested in using either of these two products then perhaps iPad Air 2 is likely enough for you – it is also more affordable.

For those who are looking for the best performance, and best camera, along with all the other capabilities I have mentioned, the new iPad Pro is definitely worth considering.